In order to wrap my head around the changes from NSX-V (ok, NSX Data Center for vSphere) to NSX-T (Data Center) I’ve created a few labs with previous versions. With the latest release 2.4 though there’s a lot of simplification been done in terms of deployment and manageability that you can tell straight away from the UI.

After a few hours with NSX-T 2.4 I’d setup the following deployment: 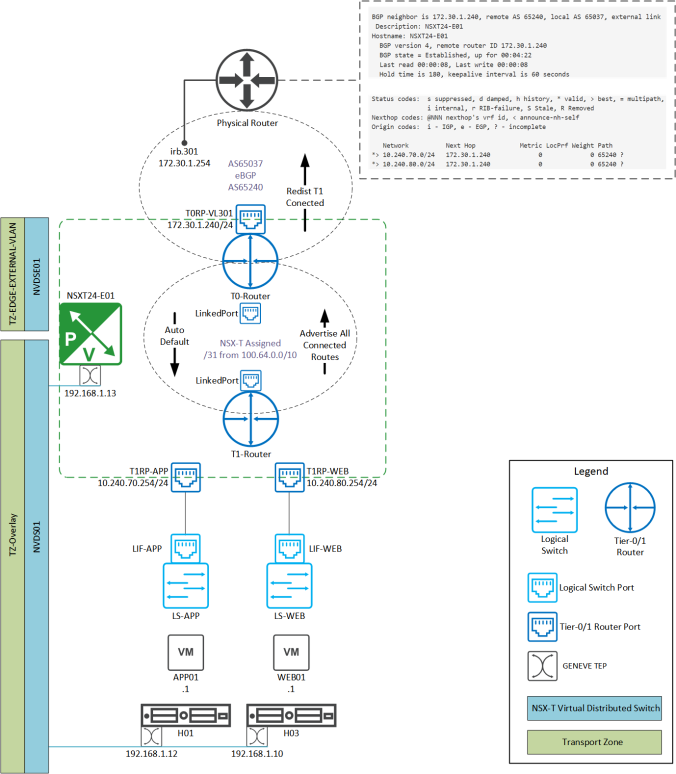 Diagramming it all out helps me to understand how the pieces fit together (and there are a lot of pieces to NSX-T).

A nice feature in NSX-T is the way that Logical Switches are presented in vCenter, compared to the ugly ‘virtualwires’ from NSX-V, you now get full integration of the N-VDS (NSX-T Virtual Distributed Switches) so they look just like the old school VDS’s. Heres’ the view from H01:

Creating segments, routers and other networking constructs had been a little complicated in previous releases, but now the new wizards makes these tasks easy. Once created the show up in, adding some much needed visibility in to what’s been created:

For my first deployment I went straight in with the Advanced Networking & Security screen, not knowing that none of these objects are shown in the fancy new dashboards… so I recreated them. Objects created through the new workflows do show up in the Advanced tab though and can be identified with the ‘Protected Object’ icon as below:

to the ramblings of another network engineer